Idoru() is an interactive sound performance that explores wearable technology and the body as an interface to control sound. The project wishes to address issues of body augmentation through the use of electronic textiles, creating an enhanced hyper-body, that generates useful data, that can be translated into frequencies and thus, generate an interactive soundscape. The system model, is a hybrid between the biological body and its technological augmentations, that without being pervasive to the body itself, allows the performer to extend its biological capabilities, though the use of subtle technologies. Conceptually, the project is influenced by cyberpunk literature as described by William Gibson and the japanese AI performer Rei Toei in his 1996 novel “Idoru”. Idoru, is a female virtual entity, that manifests herself only through her performances, creating this way a unique and personalized experience for her audience. Likewise, the Idoru performance is about creating an artificial entity, that comes to life through sound, body and space exploration, with the intention to create an immersive environment for herself and the public. Sonically, the project is influenced by early electronic music experimentation and the sci-fi aesthetics of Delia Derbyshire and Louis and Bebe Barron.

Through the use of a LilyPad Arduino microprocessor and an XBee wireless antena, the garment worn by the performer is connected to sound generators, sine and noise oscillators reactive to the performers gestures, controlled by accelerometers that are located in the wrists of the garment. The design references a retro-futuristic aesthetic, influenced by cult films like THX 1138. It is characterized by its minimal and sophisticated lines, referencing science fiction films uniforms and Star Wars Princess Leia’s high neck line white dress, but with adding a contemporary twist, incorporating black lace in the sleeves.

Video documentation from the performance in Athens: 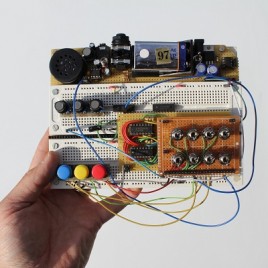 Peter Edwards "Through a process of improvisation I seek out behaviors which are pleasing to my senses and beyond my ability to fully understand and predict. At this point I am both performer and aud... 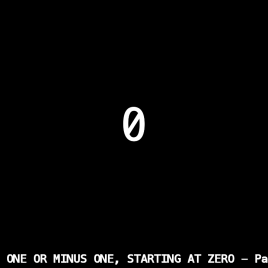 PLUS ONE OR MINUS ONE, STARTING AT ZERO

Will Burn This project is an ongoing and potentially infinite series of 10 minute videos that features a persistent number (which began as 0) to which 1 is either added or subtracted, based on a 50...