LIMEN is an electronic device designed by http://r-aw.cc to de-codify electromagnetic pollution produced by wireless networks. An analog and battery-operated receiver based on AD8313 IC able to amplify and demodulate frequency ranges between 0.1 GHz to 2.5 GHz produced by wireless based networks.

LIMEN amplifies and demodulates electromagnetic activity into audible ranges, exposing high frequency ranges produced by wireless devices overused in contemporary societies. This electromagnetic pollution is used by http://r-aw.cc as an impulse to modify the acoustic space with audio visual performances, printed matter, lathe cut vinyl in different formats, objects, publications and pedagogic strategies. Through the process, several experiments have been produced ranging from the amplification of electromagnetic activity produced by wireless cameras attached to a balloon to the amplification of microwaves, computer based applications to visualize data traffic and public performances. 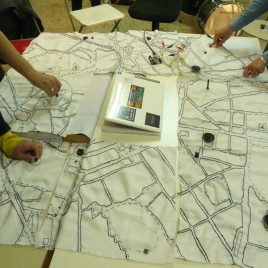 Artemis Papageorgiou, Afroditi Psarra We propose a Haptic City workshop for the city of Bergen. The aim of the workshop is to build a prototype of an embroidered responsive map of the city, togeth...