The installation Collins Slide Show (2012) is an interactive slide-show by Wolfgang Spahn. It’s based on a modified slide Projector. It projects at the same time an analog slide and a digital LCD screen. The LCD is controlled by a Paper-PCB version of an Arduino.
The slide shows a satellite picture of one of the most famous slide shows ever. Collin Powell presented that picture to proof that Saddam Hussein has weapons of mass destructions at the UN on February 5, 2003, to argue in favor of military action against Iraq.

The LCD on the other hand shows a low resolution shooting game in the style of a classical gameboy. The visitors can shoot and play the game by using the remote transport control of the slide projector.

Two complete different medias, an analog and a digital one, are merged to one projection. In doing so the depth of sharpness change between the two medias. The focus is either on the slide and the game is out of focus or vice versa. That creates an amalgamation of the contradiction of a simple LCD resolution and the infinite resolution of a slide.

All circuits are based on Paper-PCB circuits by the artist which you can find on his open hardware projects on http://dernulleffekt.de 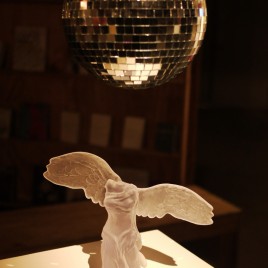 Geraldine Juárez The F.A.T Nika is a Fake Gucci for the fame economy. The Golden Nica is replica of the Greek Nike of Samothrace. It is a handmade wooden statuette, plated with gold, so each tr... 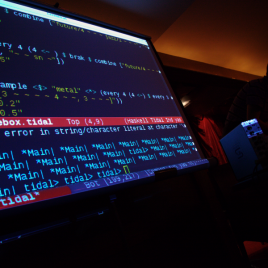 Alex McLean A remote installation/durational performance. Alex will live code music from Yorkshire. A display will show a live screencast of Alex's editor, superimposed over a video feed from a ...